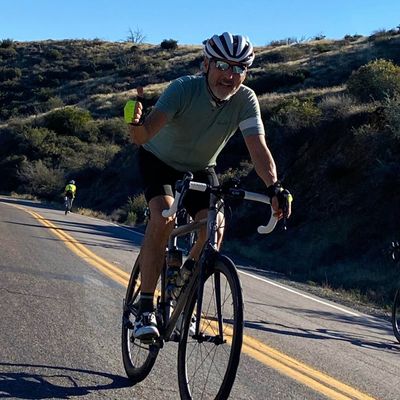 No one can ride our bike for us; yet how we ride, how we share that very personal journey, can have profound effects. Cycling, riding fast or creating megawatts is not the goal, at least not for me. Yes, these and related aspects are part of the cyclist’s journey, yet not the reason for the journey.

Sometime in the mid-1980s (when Prince informed us that doves do indeed cry), I bought my first true race bike and started chasing the finish line. The bicycle was a Winners Ride Direct from the criterium legend, Tom Schuler. His hot ride, I soon discovered, did not come with his legs, desire or focus. I was mostly fast enough to watch races from the back of the pack.

This did not deter me though. The spirit of the sport, the camaraderie, the shared respect were becoming part of my life. I accepted that even though I was not to be a notable racer, I could still contribute to the community. To quote Bruce Springsteen, “from small things mama, big things one day come”. My first small contribution was to organize our club’s official USCF race. This eventually led to revitalizing the USPRO Criterium Championships. I had the combined challenge and honor of event organizer and race director. The race did not grow, it exploded. It became the only North American criterium to have legitimate UCI standing. Many thought the race would be a one-off event. Instead it lived 13 consecutive years of unique events. The USPRO championship was the heart and around that heart, a championship spirit came to life. For many professionals it was the focus of the year, for others: their cycling careers. Friendships and relationships inside and outside of cycling began to form.

In all of this, a seed was taking root which would affect my life profoundly twenty years later. The Championships is how my wife, Cindy, and I came to know Robbie. Cindy signed in all the professional racers, including RV, and I decided who would be called up to the front of the peloton. There was no grand movie moment of connection in flashback. It was simple mutual respect and an unexpected connection which kept me in the early VQ circle. During this time, my friend, Chris Vogel, asked me to help him become a racer. I gave him my race bike and told him he needed to find a true coach. (Chris later became a coach himself at VQ.)

Fast-forward to October 2019. I was recovering from a major injury some felt would be the end of my cycling journey. I called Robbie. We had not spoken in over a decade. He did not believe my cycling journey was over. Nor did Noda, Ron, Steve Jenson or anyone else at VQ. My progression over the last 180 days is beyond anything I could have dreamed. January 2019 I was wearing a body cast to hold a broke back together; January 2020 I am riding with VQ in Arizona and feeling stronger every day, again chasing my finish line.

Yesterday, most unexpectedly, Chris reached out to say: “Fond memories of our rides together…thank you for introducing me to cycling.” (He also returned that race bike, fully restored!)