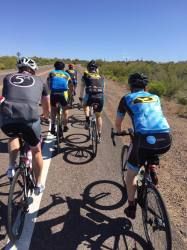 One of the central components of off-season training is improving your technical skills. On the bike, this includes looking at pedaling economy and potentially increasing cadence. A common mistake among new cyclists, and some more experienced riders as well, is a pedaling cadence that is too low.

This article will offer insight regarding why an increased pedaling rate may be beneficial to your performance and how you can start spinning faster effectively. First, it is necessary to understand a bit of the science behind power production at different cadences as well as the related physiology. Physics tells us that power is the result of work divided by time, or in the case of cycling gear ratios, divided by cadence. What this means is that it’s technically possible to produce a given power in any gear on the bike provided the appropriate cadence adjustments are made. As you might imagine, the number of gears in which a given power can be produced efficiently is much smaller. Laboratory testing attempting to determine the most economical pedaling rate has continually found this rate to occur at 50-60 rpms when viewed in terms of power produced in relation to energy consumed. Interestingly, it is also well established that both amateur and elite cyclists freely choose to pedal at a much higher and less metabolically efficient rate of 80-100 rpms. Although researchers have not been able to reach a consensus, the most likely explanation is a greater relative contribution from the cardiovascular system at higher cadences. The heart and lungs that make up the cardiovascular system work non-stop. This means that although they are not capable of tremendous force production, the endurance of the systems is seldom limited. The muscular system, on the other hand, will recruit the minimum number of motor units to complete a task, beginning with the weaker but more aerobically efficient slow-twitch fibers and progressing to the stronger but anaerobically fueled fast-twitch fibers as slow-twitch fiber capacity is exceeded.

Adopting a pedaling rhythm that keeps the force requirements low enough to be sustained primarily by the slow-twitch fibers, and thus the cardiovascular system, can spare fuel in the anaerobic fibers and delay fatigue late in exercise. Remember our earlier point that a given power can be produced with several different gearing and cadence combinations. For example, let’s take the power required to maintain 20 mph, approximately 200 watts depending on body size, aerodynamic drag and terrain conditions. You could ride at 200 watts in the biggest gear on the bike, and cadence would probably be in the range of 40-60 rpms. Conversely, you could also ride at 200 watts in a more moderate gear and 80-100 rpm. In the latter case, you have reduced the force requirement of each pedal stroke in half - a load within reach of the slow-twitch fibers - but compensated by producing that force more frequently to maintain overall workload.

Depending on your current preferred cadence, adopting a higher cadence may not immediately result in improved efficiency and delayed fatigue. Faster pedaling will result in increased breathing and heart rate at a given power output as demand on the cardiovascular system increases. The neurological system will also have to undergo some learning to become more efficient at rapidly cycling each motor unit. On first attempt, it’s possible to actually fatigue more quickly, and it could take a month or more to fully adapt to a higher cadence. The approach to faster and more economical pedaling will not differ significantly from the approach you take to improve power, except that the emphasis will be on cadence rather than workload. Short intervals at high workloads are employed to increase sustainable power on longer duration rides. In the same way, short intervals of high-cadence pedaling will allow you to more easily maintain a high cadence for extended durations.

With some patience and practice, you will soon find yourself capable of effectively adopting a higher cadence. Whether you race on the track, in crits, time trials or triathlon, there are benefits to be gained. Make use of your off-season training to implement these changes and the adaptation should be complete by the spring so that you will be ready for more focused work on energy system development.