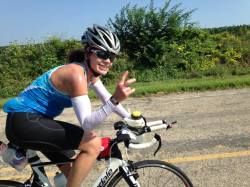 One Leg at a Time

Volume and intensity tend to be the two performance components in which endurance athletes focus most of their efforts. These areas tend to yield the quickest and most recognizable gains. However, if athletes fail to address movement efficiency, they are missing a vital piece of the puzzle and are ultimately getting less speed from more effort.

Although drills may not offer the same leg-searing pain of VO2 intervals or sense of accomplishment after a long ride, single-legged pedaling should form a central component in any endurance athlete’s training plan. The fact that countless professional athletes continue to advocate such drills throughout the year should be reason enough to include them in your plan. Performed correctly, these drills will help to improve pedaling mechanics and equalize imbalances between legs, as well as strengthening the hip flexors to enhance running ability.

To start these intervals, sit up on your bike, meaning the hands are either on the tops or resting on the aerobar pads. This will create the most open hip angle and allow you to make better use of the hip flexors. Some riders may even need to sit all the way up with hands off the bars in order to get the hang of it. As form improves, you can experiment with trying to perform the drills in the drops or aerobars.

Imagine looking from the right side of the bike and start with your foot just in front of top dead center (think: 1 o’clock). The movement will start from the glutes and quadriceps during the power phase. This is the easy part. The actual power requirement is really fairly low as you are basically allowing the leg to fall toward the earth. These two muscle groups remain active until about 6 o’clock, but with practice can be extended a little further.

At roughly 5 o’clock, the calves and hamstrings come into play. This is where the “scraping mud off the shoes” recommendation comes from. Although studies have shown that athletes are incapable of producing significant positive force during the recovery phase, with both feet clipped in, they are able to un-weight the opposite pedal slightly making the power phase a little easier on the other leg.

The most challenging part of the stroke is the final recovery from roughly 9 o’clock back to 12 o’clock. The hamstrings can no longer contribute significantly, the glutes are not yet active and you can’t cheat the pedal around with the other leg. The only thing left is to activate the hip flexors and drive your knee forward toward the handlebars to clear the leg through the top of the pedal stroke and set up for the next power phase.

Structuring single-legged drills into your training is not complicated. You have plenty of time during your warm-up and cool-down to include them with each workout. Throwing in a set or two in the middle of a long ride will also provide a slight change of pace to ease the monotony. Like normal intervals, you will want to progress your single-legged work. Initially, it may be plenty to spend 5 minutes alternately pedaling with 30 seconds on each leg. As your form and endurance improve, you can increase that time to 1 minute and even on up to 2 minutes while also increasing the total amount of time you spend pedaling with each leg.

As with any drill, single-legged pedaling needs to be performed correctly in order to be effective. At the root of the issue, you are trying to retrain your neuromuscular patterns, so you want to be sure you are sending the correct signals from the muscles to the brain. Many times, the first attempt at single-legged pedaling is a bit sloppy because the muscles of the leg are not used to doing all the work on their own. However, once the basic skills are understood, you are just spinning your wheels when the muscles fatigue and your stroke starts to degrade despite your most intense concentration.

Start by pedaling slowly at first so that you can really feel every part of the pedal stroke. Over time, cadence can be increased back up to your normal rhythm. There are also a number of variations that can be utilized for even more benefit, such as low-cadence strength endurance intervals to develop greater pedaling force and side-to-side emphasis with both feet clipped into the pedals, but focusing on producing power with one side for 15-20 strokes and then switching the emphasis to the opposite side. With consistent repetition, these drills and their variations will help to refine your pedaling, allowing you to ride and run more efficiently and allowing you to reap greater benefits from your volume and intensity work.