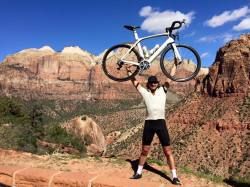 How to Go About Goal Setting

As a group, endurance athletes are some of the most goal-oriented competitors. They have to be in order to maintain their motivation for long, hard training sessions, often in less than ideal conditions. Still, at certain points in your athletic career, you may struggle to set a goal that really inspires you or, conversely, become demoralized after not achieving an overly ambitious goal. The perfect goal should force you to stretch, but not require a nearly unfathomable leap. The aim here is to offer direction on how you can strike this balance with your own athletic and other endeavors.

Often, the biggest goal-setting challenge is when you embark on an unfamiliar journey, whether this comes from jumping into endurance competition from a team sports background or expanding to a new area within endurance sports. The problem lies largely in the fact that you lack comparative reference points at this stage. It’s hard, and likely naïve, to say “I want to race professionally” or “I want to qualify for Kona” before you’ve competed first. The angle of ascent from beginner athlete to world-class competitor is too steep to handle in one chunk, if it can be overcome at all. Remember the old adage of putting the cart before the horse: before setting goals on the world stage, it’s worth seeing how you stack up in local events.The next step in setting appropriately challenging goals is making them as objective as possible; they should have a designated achievement date as well. Good examples might be: “I want to break an hour in a 40k TT this season” or “I want to cut 15 minutes off my Ironman marathon split at Madison”. In each case, the goal is explicit and falls within a predetermined timeframe. An example of a less effective goal might be: “I want to finish well in Cat 4 races”. This statement lacks a hard timeframe and leaves the definition of “finishing well” very vague.

With an objective goal in mind, you will also want to draw on your own experience to ensure that the goal is within reach. Perhaps the goal is improving your Ironman bike split by 30 minutes, but doing so would require you to improve your submax power from 200 to 250 watts. Your training should tell you whether such an increase is possible within the timeframe you have before your goal. If it isn’t, you will need to find another way to increase your speed, such as improved aerodynamics or better bike-handling skills, or else readjust your goals to something that is attainable.

Remember to account for your own rate-limiting factors in relation to the nature of the competition. Winning the state championship criterium that nearly always finishes in a sprint could prove challenging for an athlete who climbs exceptionally well but lacks explosive power. This is not to say you should not set such a goal. Just be sure that you are prepared either to work out a strategy allowing you to take advantage of your strengths or design a training plan limiting the effects of your weaknesses.

Finally, be sure to take stock of your personal limitations. Maybe you have shown consistently that your physiology and ability point to success in long-course racing, but you also put in long and inconsistent hours at the office and struggle to maintain a consistent training routine. Training appropriately to maximize your fitness for such an event may not be realistic, even if you could excel under the right circumstances. A major concern for Midwestern athletes is the winter weather. The climate is often miserable and unpredictable at this time of year, and sufficiently preparing for early season races is a very real challenge. Sometimes it is unavoidable, but you may be able to take advantage of the situation to rest and better prepare yourself for events later in the season when the weather has warmed and stabilized.

Setting goals is challenging and, at the same time, absolutely essential to your training and development as an endurance athlete. However, by using your knowledge from past experience to set goals that are as objective as possible and taking account of the variables you will face, it will be much easier.

Booker T. Washington once said, “Nothing ever comes to one, that is worth having, except as a result of hard work”. The same can be applied to our own endeavors as athletes: no goal worth achieving is accomplished without reaching beyond prior experience.