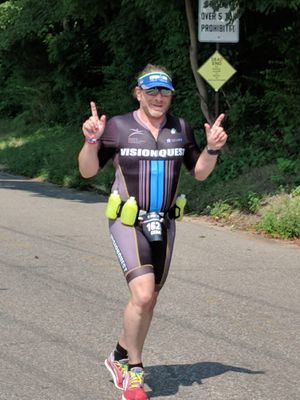 Ever since leaving the structure of high school sports, I have struggled to maintain any regular exercise routine. In my younger days, this was not much of an issue, but the lack of activity began to weigh heavily on me as I entered midlife, literally. My weight increased to 240 pounds which really didn’t look or feel very good on my 5’8” frame.

In 2012 I was diagnosed with high blood pressure and that was the shock to the system I needed to make a lifestyle change. With exercise and changes to my diet, I lost 45 pounds. But by the spring of 2016, I was losing the motivation to stay active and my weight had risen to 206 pounds and still climbing. I never became one of those people that didn’t feel good if they didn’t exercise. The running that I had been doing had become another chore that no number of race t-shirts could motivate me to like. I had a bicycle, but really didn’t know how to use it as anything other than a mode of transportation. This was also around the time I noticed I could no longer keep up with my wife when we would cycle together.

She had started taking classes at VQ the year before.

Enough was enough! In April 2016 I had a consultation with Robbie with a baseline DexaScan and then joined as a full member of VQ. I have always been a science advocate and comfortable with statistics and data, so I found the technical aspects of VQ and the CompuTrainers a welcome relief to the usual mumbo jumbo I had experienced in the fitness world. Even so, initially I was intimidated being around so many obviously serious athletes. I also realized one of the things that had made maintaining my fitness so difficult: I never really believed I could be fit, could be an athlete. I was so afraid of that first group ride--so worried about looking stupid--I tried to back out, telling Dave Noda that “I wasn’t ready for this.” Dave talked me down from the ledge that day and now the VQ group ride is often the highlight of my week.

There were still struggles along the way. The first season of cyclocross found me coming in DFL whenever we did the “fun” races. But (and this is the important part) with the encouragement of Robbie, Dave, every VQ coach/ride leader and my VQ friends, I kept at it. In January 2016, I attended a VQ Triathlete meeting and then decided I wanted to do a triathlon. More training, earlier mornings, more coaches, more new friends.

By June 2017 I had my fourth and latest DexaScan. I have lost 27 pounds of fat and 10 pounds of muscle. That August I completed my third Olympic triathlon.

I feel better about myself than I ever have before. Not just because, for the first time in my adult life, I really feel healthy (although that’s a big part of it), but also because now I am part of a community that nurtures it. Now if I miss a ride or a swim, I don’t feel a sense I relief. I feel like I have been deprived. When I was injured, my friends at VQ cared and showed it. I felt missed and like I belonged--for real. This is something that only happens when community and friendship are more than a motto on a wall!

VQ is a very special place. I feel like my journey has just begun and I know that wherever it leads, I will be in a wonderful place.