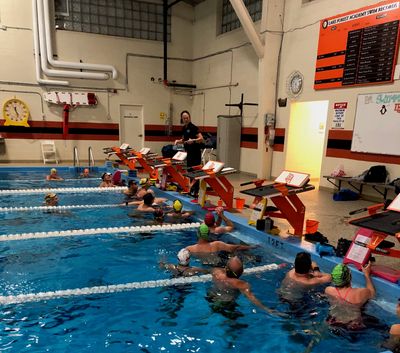 Just Get in the Pool

Which came first: the chicken or the egg? It’s a perplexing question, isn’t it? Less than a year ago, I had a similar thought: do I hate swimming because I’m bad at it or am I bad at swimming because I hate it??? It’s cyclical and it’s actually a simple solve: swim more and you’ll get better at it and then you’ll enjoy it. Once you enjoy it, it will be easier to keep getting in the pool and you’ll keep getting better. The only problem was that I had to keep doing what I hated first! Now, I know I’m not alone here, so all you triathletes who just “get through” the swim so you can start racing, listen to my story…

My Half-Ironman swim training used to consist of getting in the pool twice a week at about 1,500 to 2,000 meters each time. I thought I was doing great. I mean, I was getting in the pool, right? I was overcoming all these hassles and getting in the pool…twice each week! Yay me!!! And anyway, swimming is all about technique, right? Wrong.

For so long, I just didn’t get it. I would look at video of myself swimming and my form looked decent. I was breathing bilaterally. Head down, hips up. Flutter kick from the hips. I felt like I was doing everything right…so why was I so slow? My reasoning was that I wasn’t built to swim. I have a short torso and long arms and legs. Fish are all torso, right? So, no matter how hard I try, I’ll probably never be a good swimmer. You hear all the time that swimming is the most technical of the three disciplines and that’s true, but it’s not the entire piece of the puzzle. You have to be fit, too. In the words of my coach, Dan Litwora, “You should think of your swimming not as a linear progression from good technique to speed to fitness. It’s really a circle in that it takes fitness to use good technique to go fast. It’s all interrelated.”

In comes Dan’s training schedule: 4 to 5 days of swimming per week at up to 14,000 meters total for the week. That’s three to four times the amount I was used to! I’m not going to lie, it was mentally and physically challenging, but now I was being held accountable. That was the trick for me. I didn’t want to write in TrainingPeaks that I skipped the workout or cut it short because of some minor reason like: I was cold, I was hungry, my arms were tired, pool was too crowded, blah, blah, blah. No one, beside myself, is going to buy my excuses. So I would just get in the pool and do the workout. Every once in a while, I would have a breakthrough (or an “ah-ha” moment) during a swim, something would click and I would start to see a bigger picture. Those moments and days were worth all the misery that I had to go through to get there. And as time went on, the volume became more manageable. I even had days where I enjoyed the swim.

It’s been about a year now that I’ve been getting in the pool more and it wasn’t until about a month ago that the switch finally flipped. All of a sudden, I looked forward to my swims. I even asked my coach if I could add an extra swim workout each week if I had the time and energy for it…WHAT?!? Did those words actually come out of my mouth???

Now that I’m excited about swimming, I have more focus in the pool. My swimming fitness is improving by leaps and bounds, and with that I’m able to improve my technique and maintain that improved technique for longer periods of time and with less energy. I have a heightened awareness and understanding of my body position, rotation, timing, how much water I’m pulling, etc. Each workout is done with purpose and focus.

And each week I watch my times drop. One of my goals for the 2012 season was to feel like a triathlete instead of a runner who does triathlons. I’d say I’m well on my way to achieving this goal!

I can’t describe how amazing it feels to have overcome such an obstacle in my triathlon world. I can’t wait for the racing season to begin so I can see how this newfound view of swimming transfers to my race performances. I am now looking at the triathlon as a whole. The race will begin at the sound of the cannon (or horn), not when I exit the water.

Now, I’m not saying that I’m all of a sudden an olympic-caliber swimmer. I still have plenty of room for improvement. But, I’ve realized that I can, and will, continue to improve and that’s all the motivation I need to keep getting in the pool. If this sounds like something you’d like to achieve, then…