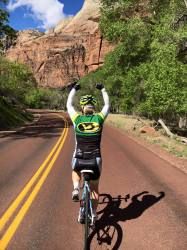 As summer approaches and I look around at the dwindling bikes and empty CompuTrainers at VQ Chicago, I’m reminded of the words “commencement” and “culmination”. It’s so much like students leaving the classroom in anticipation of what lies ahead this race season. Our little VQers are gussied up in shimmering VQ Gear to head out into the oppressive heat of our Chicago sun, swim at Ohio Street Beach and ride the open country roads. The elements are begging almost as if they too have been waiting for VQers to take what they learned inside and see if they have what it takes to flatten those hills. This is also my time to reflect and see if my Functional Training students have learned anything during our short Fall/Winter/Spring seasons. In FT, we also modeled the cycling phases of Climbing, Endurance, Power and Strength. We train and we train, sometimes without looking at the benefits gained by the most overlooked aspect of endurance training: strength training (or in our case, VQ Functional Training). I know better than most that you can’t strength-train your way into a triathlon race, cycling criterium or any other endurance race (despite the misguided opinions of some CrossFit addicts) because you need to specifically train in the discipline in which you race, be it swimming, biking, running. What I like to hear is how Functional Training has made a difference in the overall conditioning of an athlete and what role it plays in the athlete’s life. I like when my VQers tell me how FT has made a significant physical realization, helping them against others in competition, or how FT has helped them overcome some very serious physical obstacles that would make the most average person sedentary. So I put forth a little discussion with three of VQ Chicago’s regular FT members in the hope that they picked up a little something from FT as they leave me for the summer (kinda) and race to their hearts’ contents. Meet long-time VQer, Dr. Cal Brown (CB), and two newer members, Michael “Porta” Antiporta (MA) and Kjerstin “The J is Silent” Anderson (KA). Here’s some of our discussion:

Don Riley (DR): Cal, you’re one of the early morning regulars to FT. I want to start with a basic question, other than why don’t you wear shoes when you do FT? (I actually know why: to strengthen your feet.) But really, how do you make use of FT?

CB: As you know, I am a huge FT believer and adherent over the past six years. FT has improved my skiing tremendously, likely to improve most all sports participation.

DR: How was FT put into practice for your events?

CB: I make use of FT in many ways. As an endurance athlete, I use FT to make my core stronger, which benefits my swimming, running and cycling directly. That is: faster and stronger.

DR: How would FT affect or influence your body if missed?

CB: Obviously, we all begin to lose muscle mass above the age of 40, so the fight to preserve gets even more important as we age. Injury becomes more likely too--another reason to do FT. Also true for women who start from a position of less muscle mass to begin with.

CB: The major disadvantage of FT is more training time demands on long course [athletes] who are already at their limits. But if you factor in that it will prevent injury, the training time spent on FT will, in some respects, pay you back. I use FT as injury prevention, the medical and scientific literature is replete with science showing core strength and FT are the best known injury prevention techniques.

DR: So, Porta, I ask you: what has FT done for you and what have you gotten out of the classes?

MA: For me, upper body strength is important, especially for the Tough Mudder*. Without FT, I would lose some quickness needed for sports outside of triathlon and endurance races. Also, I feel more balanced when mixing FT with my bike and run workouts. And of course, you get trivia conversation topics from the instructor [Don], so it stretches your mind too!

KA: Oh, and of course, it's fun! Especially with the “Eye of the Tiger” station on Pandora radio!

DR: How about you, Kjerstin?

KA: I am pro-FT for two reasons. It gives you a chance to strengthen muscles that might be weak relative to others, such as hip abductors/adductors. This can be key for maintaining proper technique and preventing injury. It also helps to improve your power by training fast-twitch muscle fibers since FT tends to involve mostly anaerobic exercises.

DR: Thank you all for your time in answering my questions and for coming to FT!

These Functional Training regulars know I wait for their tales of race wonder (with some exaggeration, I hope) so they can start the next phase of their education with hopes of being better for the next race season. But don’t think FT is over for the summer at VQ Chicago. There will be the Summer Maintenance Phase, open to all, starting Wednesday, June 6th! School is not out for summer!

*Tough Mudder is an adventure race designed by British Special Forces to raise funds for wounded warriors. It includes a 10- to 12-mile run over rough terrain, climbing challenges and painful obstacles like the “ElectroShock Therapy" and "Electric Eel” in which participants have to crawl through hanging wires giving off hard, quick shocks to your body. Fun, huh?